[email protected] is an integrated community hub, bringing many lifestyle services together under one roof, including a sports centre, a public library, a community club, a polyclinic and a senior centre. There are also more than 30 retailers and eateries. [email protected] is conceptualised as a town-level community avenue to meet the changing lifestyle needs of over 290,000 Bedok residents. Soundzipper was employed by the client to inspect and design acoustic improvements and post-remediation acoustic testing for several areas at [email protected] including dance studios, music rooms and cooking studios. One of the tasks given was to perform a feasibility study to enhance the current sports floor to address user complaints regarding jumping impact noise and audible basketball sounds at the top-level sports hall that were affecting the library situated directly under it.

Our Analysis and Recommendations

Soundzipper conducted a design review and preliminary acoustic surveys to determine the baseline acoustic performance of the as-built construction. As the community centre was already in full operation, any remediation works we suggested had to be kept low impact and easy to implement. Below are some of the problems we helped tackle.

Noise was leaking between the dance studios and music studios. Upon inspection, it was discovered that the noise was leaking through the façade which was shared by both studios. We recommended that an additional pane of 19mm glass be added in front of the dance studio façade. This increased the sound isolation between the dance and music studios by more than 20 dB so that approximately 75% less noise was traveling through after remediation.

Noise Leaking into the Activity Rooms and Classrooms

The main source of noise was observed to be from the ceiling. We recommended installing at least one layer of 50mm 60kg/m3 rockwool over the suspended ceiling and sealing all mechanical and electrical penetrations with acoustic sealant to reduce noise transmission.

An assessment of the acoustic design of the library revealed an excess of reflective surfaces. The noise produced outside the enclosed area is funnelled into the library and reflects off the walls, increasing the Reverberation Time (RT). The proposition was to treat the exposed surface areas with lightweight acoustic panels.

A third-party test conducted by TUV-SUD found that the sports hall flooring had an impact sound isolation level of AIIC 66, which was compliant with the IIC rating specified by the original acoustic consultant. Our opinion was that the original IIC specification was flawed as it was an insufficient indicator of the ability of the sports flooring to isolate impact noises. This is because sports-related impact noise usually has a significant low frequency component that is not considered in the IIC rating, which was more suitable for regular footstep noise.

To mitigate the basketball and jumping noise, we redesigned the sports flooring. 2 new sports flooring mock-ups were designed to give the client a comparison to the original sports flooring. One mock-up was based on the Pliteq FF50 system while another utilised Getzner Sylomer SR-18. Our tests indicated that the Sylomer system had better low frequency performance, decreasing the low frequency noise by up to 40%.

Both mock-ups were agreed to be satisfactory by the end user – Sports Singapore – and the decision for the type of floor system that will be constructed was left to the client. 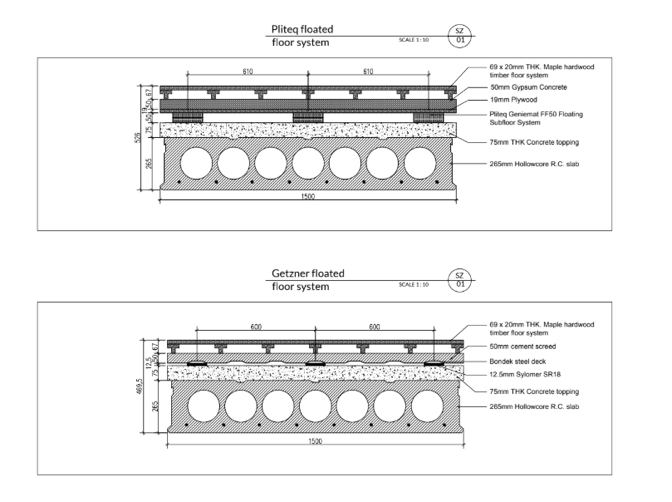