I want people to see the garden as a place for observing themselves intently… not comprehending the garden that extends in front of one’s eyes as an objective target, but just considering it as part of oneself – I want people to view the garden they are gazing on and their own selves as one. Things are as they seem. The rocks in a garden, also the trees, water – everything is there as itself. This is called truth.

Japanese gardens are traditional gardens deriving from Japan, designed to unfold the essence of nature. The design incorporates the guidelines from traditional Japanese and Chinese philosophies. Japanese gardens are a perfect combination of natural landscape and a man-made scenery, constantly changing and evolving over time and different seasons.  Materials used are very important to highlight the vulnerability and constant state of flux.  Avoiding artificial ornaments, while using plants, stones, and aged materials is essential. In addition, the principle of asymmetry (creates the impression of natural), simplicity, the contrast between lines and curves and openness all contribute to embodying internal rules of nature through landscaping. 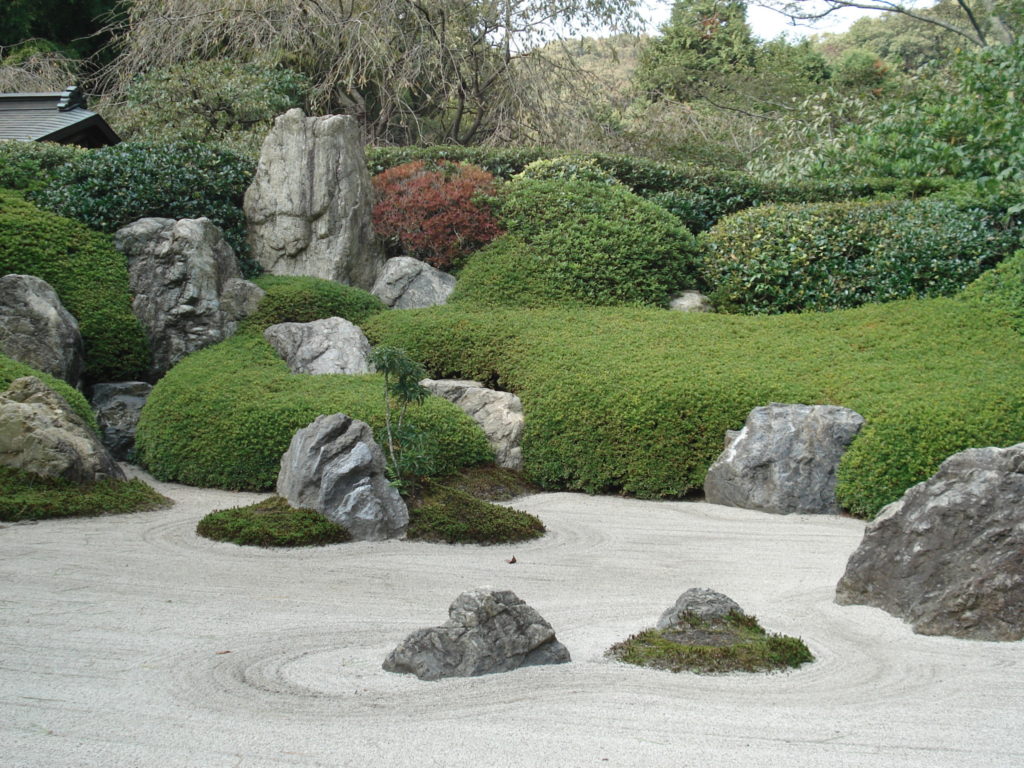 However, maybe the most striking idea about the Japanese gardens is the fact that they are telling a story about the essence of life and nature through the use of all the senses. The gardens are a multi-sensorial space, portraying the Universe on a subconscious, bodily level, through various visual and aural scenes, as well as smell and touch. Therefore, every single bush or flower is planted carefully, every stone positioned with a precise function. While slowly moving through the garden, one gets to travel through different times and spaces. Planning this kind of complete and complex experience can be a great inspiration for today’s architects, sound- designers, acousticians, and planners, who often neglect the importance of various senses in the design process.

Planning the Acoustic Image: Learning about the Universe through Sensorial Experience

The landscape appeals to all senses. The Japanese garden stages special visual and aural encounters – focal points, alongside the journey through it. Planning of the physical environment is in tight relation to the acoustic properties of the space.  The shape of gardens and chosen materials create specific aural environments – scenes. Hard surfaces and rocks amplify local sounds and mask the exterior city sounds. In addition, water features, birds, fishes, and insects are creating their own micro-environments and are all carefully planned as part of the wider acoustic scenery. A precisely planned morphology of the terrain and different sonic devices – Suikinkutsu, Shishi Odoshi accentuate various sonic encounters. And vice versa. The sounds focus the view on specific visual scenery. Michael D. Fowler, in his book called Sound World of Japanese gardens, calls this phenomenon an acoustic horizon:

Waterfalls are obvious design features that provide an aural content that can focus attention locally, or equally mask the exterior, or articulate a particular region in the garden through an auditory zone or acoustic horizon.The waterfall and subsequent creek ﬂow is a key sound mark in Japanese garden design. Speciﬁc tunings are made through the placement of rocks and variation in drop depth. As a result, particular planting regimes are made: according to the vegetation – tree or shrub type, enables acoustic arenas to emerge: the places where birds are feeding, roosting or crickets singing. The particular plants or flowers impact what the possible soundscape qualities will be throughout the year and different seasons.

The Humble Path of Japanese Gardens 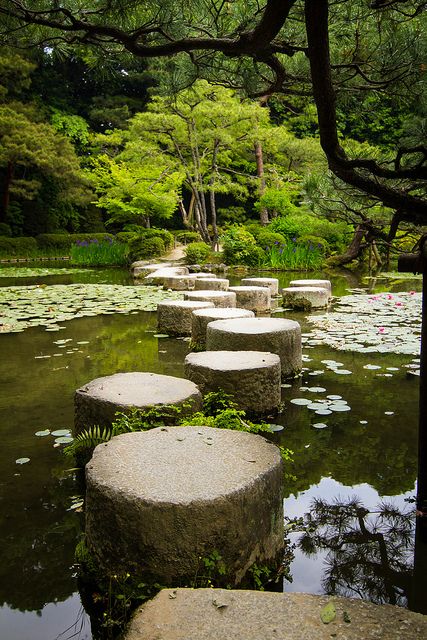 A less obvious but equally relevant example of sonic encounter mentioned in the book is the sound of footsteps. Human presence in the garden deserves both visual and auditory awareness of changed circumstances. While the traditional wooden shoes step alongside narrow, slippery stepping stones or gravel paths they are creating a rhythmic interactive atmosphere. Michael D. Fowler finds this beautiful sonic presence travel through the time of the garden.

Space and Time Travel through the Borrowed Scenery

Speaking about the time, one of the most intriguing ideas of the gardens is the concept of Shakkei or Borrowed Scenery. It is a design principle where the background elements such as mountains or trees are integrated into the landscape, manipulating the viewer’s perspective. In this way, the boundary between interior and exterior disappears. The famous scenes similar to postcards (like Mount Fuji) were scaled and reproduced by precise positioning of stones, gravel, and other greenery, in relation to the background. This approach flourished in the Edo period when inhabitants of the island could not travel freely. Therefore, the promenade through the garden allowed an imaginary time and space travel through all these different environments. 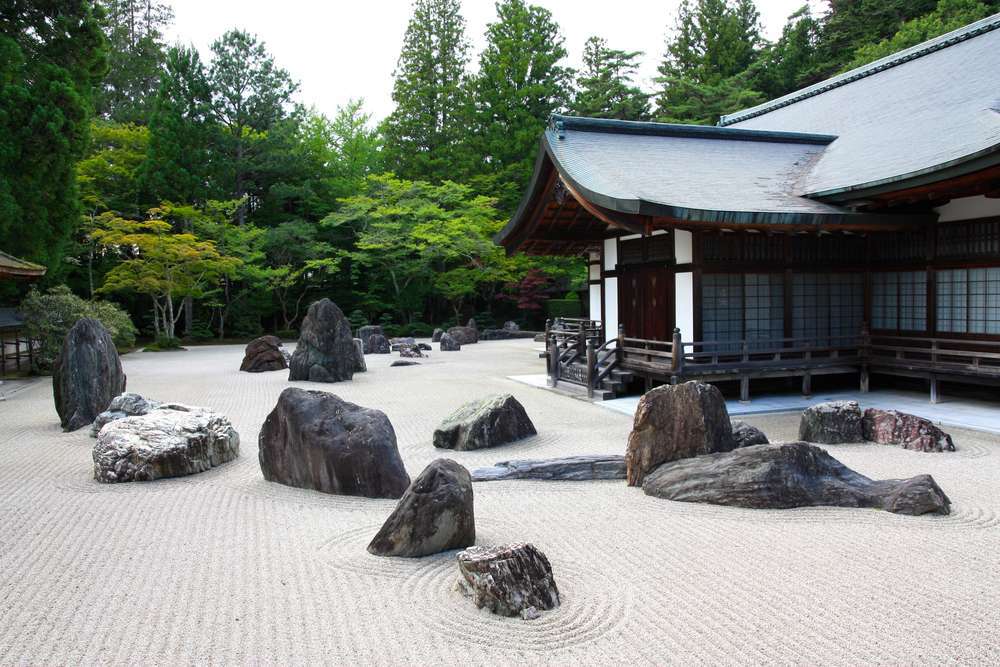 Moreover, Shakkei was possible in the aural domain too. In the example of a dry waterfall at Kyu Furukawa Teien, no sound source is present within the closest surrounding. However, a pond acts as a reflective surface, amplifying the water sounds coming from 50m away. The illusion of water is “borrowed” both aurally – through reflection and visually – through the washed out path of smooth stones, resembling water.

Famous French philosopher Micheal Foucault compares his notion of Heterotopia (the space of otherness) through the philosophy of Japanese gardens: It is a space that produces different narratives through layers of meanings. Therefore, Heterotopia comes to a full capacity when man arrives at a sort of an absolute break with traditional time.

Chōzubachi is a traditional stone water basin, located at the entrance of the Japanese temples, shrines or gardens. It consists of a stone base and a wooden ladle for pouring the water over hands. It acts as a purification tool, before entering the temple or tea ceremony. In addition, Water dripping and overflowing the basin creates the atmosphere of freshness and calmness, while sonically raising the awareness of changed circumstances in the environment – marking the entrance point.

Suikinkutsu means “water koto cave”. It is a mysterious sound device that often accompanies Chōzubachi. Most commonly, it stands near ceremonial tea rooms, offering the surprise of relaxing sounds before the tea ritual.

While carefully hidden from the viewer in the ground, visitors ignorantly wash their hands over the ceremonial stone basin at the entrance of the Japanese Garden. Water henceforth splashes over the pebbles in front of the basin. Consequently, the drops fall through the pebbles into the buried clay jar. All of a sudden, a clear water dripping sound resembling traditional Japanese bell instrument – koto, appears. The act of washing hand itself seems like the act of instrument playing.  Nevertheless, the beautiful sound should not become the main attraction in the garden, as Japanese author Isao Yoshikawa says. In fact, the mysterious water echoing should be enchanting precisely because the source remains hidden. The beauty lays in the tension of the unknown.

It is a bamboo sound device, used in the old times to scare away animals like birds, deer and other others that could do damage to local agriculture. In principle, the water slowly pours into the bamboo pipe. When filled in, the pipe tips over and empties the water out. After which it returns to its original position. As a result, the bamboo makes a “clack” sound while hitting the hard surface of basin, rock or stone.

As a result, the bamboo makes a “clack” sound while hitting the hard surface of basin, rock or stone.

Typically, Shishi Odoshi stands at the entrance of traditional Japanese tea house. A zen monk would drink the water from the Shishi Odoshi water basin as an act of purification before any ceremony. The clicking sound accompanies this ritual of internal cleansing, underlying the importance and consequence of every movement or object around us.

Even though, originally designed to chase away deer and birds from the rice fields, it developed over time into a meditation device. In the Zen monasteries, It acts as meditation focal point and as an agent of thought clearing. Rice field or farm becomes one’s mind. Rice is representing thoughts. Birds and deer are a metaphor for a distraction that can damage the agriculture. Hence, the sudden click breaks the wandering thoughts and brings visitors back to the presence:

The basic idea of Zen is to get in touch with the inner workings of the self in the most direct way. Thoughts should be fixed on nothing. Zen aims to achieve an inner spiritual experience and believes in the inner purity of man.

Bonus! Check out this calming sound installation, inspired by Suikinkutsu

Nelo Akamatsu is a Japanese artist. He positioned sewing needles to float on the water surface in magnetized glass tumblers. Consequently, when electricity is applied outside of the glass tumbler, a temporary magnetic field draws the needle to the coil.

Got an interesting story to share? Why not email us at [email protected] today and you could be on your way!

One thought on “Sounds of Japanese Gardens”